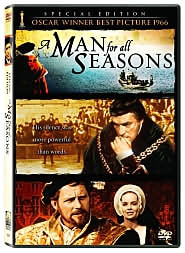 I’d actually seen this movie before.  When I was a senior in high school, an older man at my church started inviting me to watch some deep, classic movies with him and then talk about them.  For some reason, it never occurred to me to question why this casual acquaintance was taking such a sudden interest in me.  In retrospect, leaders at church probably saw how unstable I was and had asked him, a steady, intellectual sort with whom I might have some things in common, to take me under his wing and give me some support.  If it was an assignment, it sure never felt like it, and I’m glad we had that time together.

Anyway, one of the movies he introduced me to was A Man For All Seasons.  However, being a slacker teenager, I regret to admit that I feel asleep right away and was out the whole time.  I felt pretty bad, because I remember him telling me that it was his favorite movie.

I just went back and watched it again yesterday, and now it’s one of my favorites, too.

Let me start with a minor observation: this is a very talky film, and therefore chiefly filmed indoors (or at least enclosed areas), and therefore has few outdoor or panoramic shots.  Still, the background and scenery that we do get is breathtaking.  The alternating snows and flowers of England are a joy to behold, and somehow these older movies capture them for us with a visceral liveliness that the more “sophisticated” current methods lack.

Now, on to the star of the show.  Paul Scofield’s majestic turn as Sir Thomas More?  No, the dialogue.  Robert Bolt’s screenplay, lightly adapted from his epoch-marking play of the same name (recently revived on Broadway, which is what made  me think of the film again after these many years), is a delightful celebration of the English tongue at its most soberly elevated.

Everybody gets in their quotable bits of erudite eloquence.  Nary a minute passes in this work without someone tossing off a line that deserves to be carved into gold and hung on the walls of every classroom, library, and, for that matter, living room in the world.  Emerson wrote that there is always one right word, and that all other words are wrong, and A Man For All Seasons exemplifies it best.  Not a word of this production could be changed and the film improved; not a word is anything less than a tribute to language so profoundly flawless that it could have been carved into stone by divine fingers and delivered to us like a holy relic.

Consider two examples of More’s wit and wisdom in action:

“I think that when statesmen forsake their own private consciences for the sake of their public duties, they lead their country by a short route to chaos.”

“I am commanded by the King to be brief, and since I am the King’s obedient subject, brief I will be. I die His Majesty’s good servant, but God‘s first.”

Shakespeare would be proud.

That pair of pronouncements also displays another heroic strength of the film: More’s character.  Not just his “characterization,” as a figure in a script, but the depth of his iconoclastic resolve to stand by his principles no matter what.  The most impressive thing about it was his quiet demeanor about it all.  He was never desperate to explain himself or be diplomatic; he merely stated facts and let others have the burden of taking him at face value or warping their own assumptions into judging him poorly.  Truly, a lesson for all seasons, including this one.