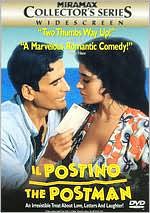 This was the third Italian film I’ve seen, after Life Is Beautiful and The Bicycle Thief.  Il Postino is certainly more like the former: a simple, realistic, yet elementally uplifting love story about the persistence of joy.

I actually confused this film with a terrible American movie that’s also called The Postman (a travesty starring Kevin Costner about which we shall never speak again), so when I heard that it was a wonderful romantic comedy, I was hesitant.  Still, I saw it at the library and had some time to kill, so…

Everything about Il Postino is beautiful and sweet.  Its puppy-love devotion to the poetry of Pablo Neruda makes Dead Poets Society seem like a monochrome grade school film strip, and while all the acting is fine, the earnest, shy mail carrier that this story follows is an original creation, totally engrossing to watch.  His growing friendship with accidental mentor Neruda makes yet another Hollywood screed look flimsy by comparison: I’d be surprised if the makers of Finding Forrester didn’t study Il Postino and botch their rip-off.  That lead actor, Mossimo Troisi, actually delayed heart surgery to finish this film, and died of a fatal heart attack less than a day after shooting wrapped up.  He was 41.  Tragic, but a fitting legacy for any thespian.

It didn’t bother me that the frequent appearance of communism in the plot was in a positive light (or, at least, not an explicitly negative one).  The postman’s innocence was easily swayed by Neruda’s charisma, and if anything, that angle of the plot added a somber, reflective climax to the story.

As is often the case for me with foreign film, the laconic photography of lush landscapes was the true star of the show.  This film worships Italy not just in its richness of language and spirit, but in its setting and music as well.  In fact, as I watched this film, I was reminded of one of my favorite television moments ever: the episode of Everybody Loves Raymond where the family goes to Italy and Ray complains about everything, until he spends a few minutes wandering around a local street by himself.  In a few heartfelt vignettes, he feels how magical this rustic, bucolic slice of heaven is; and as he experiences this minor epiphany, the gentlest of Mediterranean melodies floats around in the air.

I thought that just came to mind because of the Italian setting.  As I tried to find that clip online, however, I found out why it had really sprung up: the music in that scene is the score from the movie Il Postino.

By the way, according to the website for television station TBS, that episode of Everybody Loves Raymond will be airing again on Friday the 23rd of this month.