I previously criticized Republican Senate candidate Sue Lowden for a sleazy, mud-slinging TV ad which insinuated that fellow candidate Sharron Angle was in bed with the Church of Scientology and conspired with them to promote a cushy rehabilitative program for prisoners.

Now that Angle has won the primary and is up against Harry Reid in November, the Reid machine has pulled out all the stops to incriminate her.  Sadly, the first major TV spot Reid launched against Angle last month featured footage  lifted straight from the Lowden ad!

Please, correct me if I’m wrong–and I really do want to be wrong on this one–but I can only think of one way the Reid campaign could have legally used that footage: with the permission of the Lowden campaign that created it.  Is this right?  Did Sue Lowden help Harry Reid make a commercial to defeat the woman who defeated her?  Would she get Reid reelected just for a chance to keep smearing Angle?  I want to be wrong about this because that just seems too low for anyone to stoop.

Here’s a screen shot of the older anti-Angle footage from the Lowden campaign, complete with the Tom Cruise picture in the corner, recycled in the Reid ad: 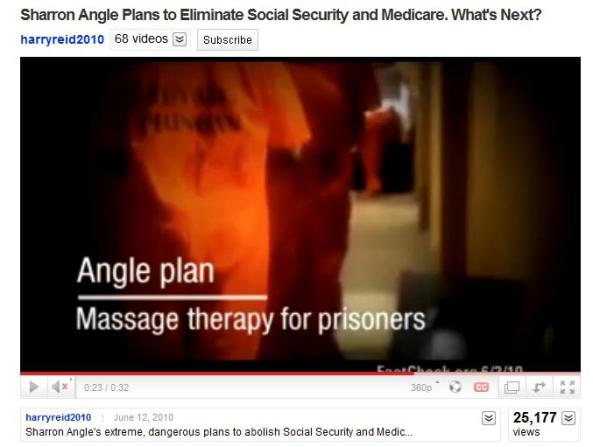 Here’s the whole Reid ad itself:

And, just to jog your memory, here’s the original Lowden ad with the same footage given to Reid: