A pet peeve: people constantly complain–students and adults alike–that they can’t understand Shakespeare because he wrote in “old English.”

No, he didn’t.  Shakespeare wrote in exactly the same modern English we still speak and write today.  He used a much larger vocabulary, tons of poetic phrasings and figures of speech, a lot of specialized references, and often simply waxed eloquent in his singularly elegant style, but his language was no different from ours.

I realize that when people call it “old English,” they mean precisely the aspects of Shakespeare’s language which I just mentioned, but still, the inaccuracy bugs me.  A little effort, time, and homework makes Shakespeare comprehensible and enjoyable, but actual old English is, practically, a foreign language.

Really.  Quick English lesson summary: The defining work of modern English is that of one of its earliest practitioners: Shakespeare.  Middle English (which could be dated very roughly from about 1000 AD to 1500 AD) is best exemplified by Chaucer’s Canterbury Tales.  Old English is illustrated best by the epic poem Beowulf.

Shakespeare, as I said, can be read with a little effort.  In fact, most of us could understand most of his work right now with practically no assistance.

Chaucer, however, is usually “translated” into modern English when printed, as his vocabulary and spelling are so different from what we use today that much of it is very difficult to read.  A sample of the middle English text is below, with a modern equivalent to help.

Beowulf, however, originates from the few hundred years before the end of the first millennium, when English was first evolving from German as a distinct tongue.  Beowulf shows that old English is basically a foreign language–in some ways, still closer to German than what we consider English today.  Not only its vocabulary and spelling, but even its letters are often so different from what we’re used to, that reading much of it at all is almost impossible without training.  (I took a history of the English language class in college and learned enough old English to read some of it.  It was a lot of fun and I wish I’d brush up on it again.)

A sample of the Beowulf manuscript is below also.  Good luck making heads or tails of it.

If nothing else, seeing these bits of old and middle English should help people to realize that Shakespeare is definitely not old English…and really not that bad at all.

The beginning of Chaucer's Canterbury Tales, in his own language and adapted for ours. Image courtesy of http://www.librarius.com/canttran/gptrfs.htm. 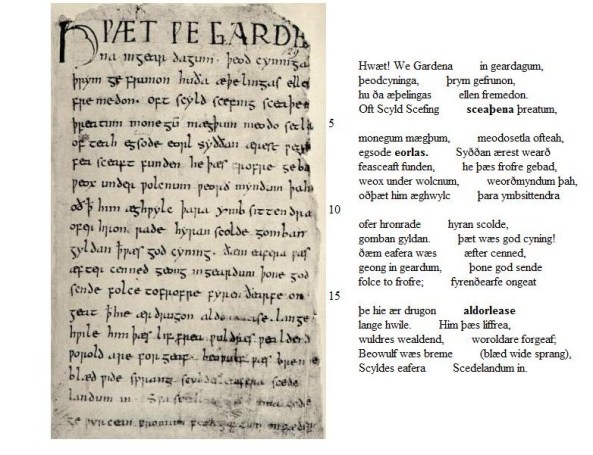 The beginning of the epic poem Beowulf, with original old English text. The name "Beowulf" appears in the fourth line from the bottom of the manuscript.

9 comments on “Shakespeare Is Not “Old English””