President Obama didn’t refer to Don’t Ask, Don’t Tell by name, but he did make a clear reference to it.  During the first half of the speech, I regretted putting “tax the rich” on my card, figuring he would never actually say it, and even though he didn’t use those three words together like that, boy did he ever come out and say that he wanted to tax the rich!

Of the ones I didn’t check off, I could probably justify at least four.  The closest he came to his phrase “Let me be clear” was “Let us be clear.”  That’s pretty dang close.  If I’d written down Tuscon instead of Arizona, I could have had bingo within the first ten minutes of the speech.  He talked about new energy sources a lot, but instead of “green,” he called it “clean.”  Close, but no cigar for me, maybe.  He also referred to the vice president, but didn’t call him by his first name.  And while he certainly addressed recovery, environment, and civility, he didn’t use those words, and it didn’t seem right to check those off.  (He discussed “cooperation” between parties, but that’s not really the same thing as civility.) 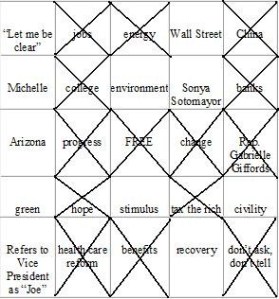 One comment on “Report: State of the Union Bingo”