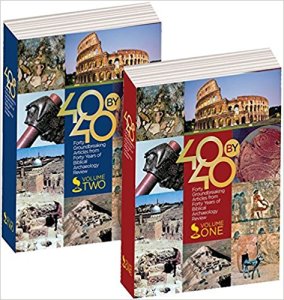 One of my goals for the year is to read 40 articles about the Bible. Casting about online and through library catalogues in January for suitable material, I came across this: in 2015, the venerable journal Biblical Archaeology Review celebrated their 40th year with a “greatest hits” collection of their 40 best articles ever. And that’s what we call serendipity.

I was able to borrow a copy of the massive, 600-page, two-volume set from the good people at the University of New Mexico. I just finished volume 1, and it was an amazing experience. I’ve never read anything like this before–it’s not technical at all; on the contrary, it’s clearly written to be accessible and exciting to a general audience. Every article was at least very good, and some were actually gripping page turners. Here are my notes on the first 20 articles, the ones in volume one. I’ll start volume 2 today.