My wife and I drove up to Provo Friday with our 12-year old and 13-year-old to attend this awesome conference. Thanks to our friends who watched our three youngest kids while we went, and thanks to Book of Mormon Central for organization such an amazing, enjoyable, educational event. Not only did we hear from several great teachers, but we got to take a tour of Herod’s temple with virtual reality headsets, see some museum displays about metal plates from Roman times and a Bedouin tent, the kids got to meet John Bytheway, and they even gave us lunch! :)

Here are my notes:

Matt Roper & Paul Fields: Abinadi to Zenos: 28 Speakers in the Book of Mormon

Mark Wright: “In the Fields and in the Forests”: Mesoamerican Ecology and Cosmology in the Book of Mormon

John Bytheway: Experiencing the Book of Mormon in the Garden

John W. Welch: April 7 and the Commencement of the Translation of the Book of Mormon

Gerrit Dirkmaat: The Printing of the Book of Mormon

Tyler Griffin: Book of Mormon Geography: A Powerful Backdrop of the Book’s Message

I cracked the code in the schedule! Notice how the most important part is emphasized in the central turning point.

Before the conference started 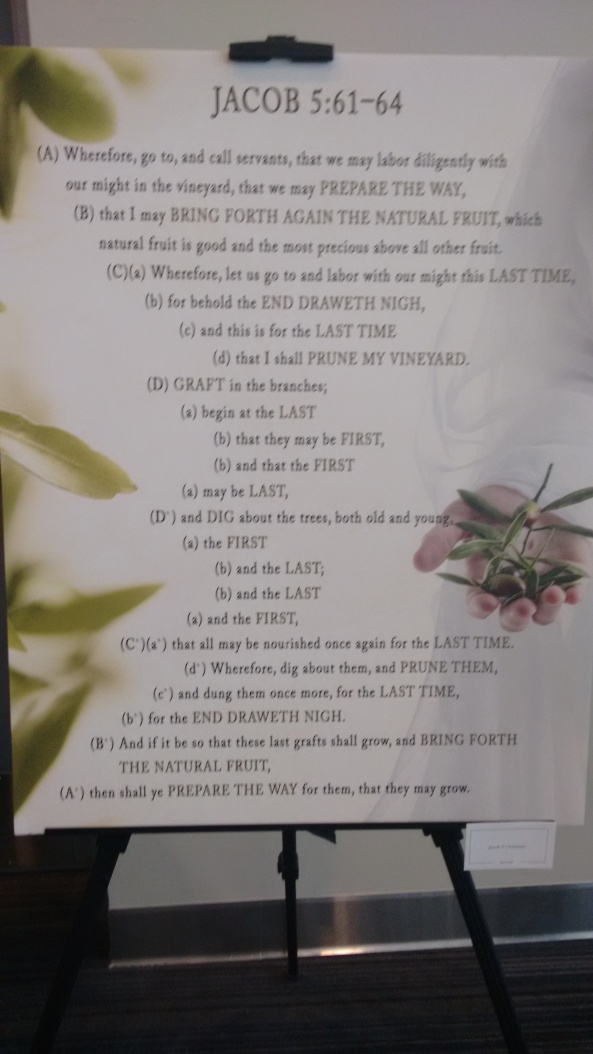 One of several such displays in the art section.

I got to meet the artist of this fantastic painting from last year of John Welch’s discovery of chiasmus in the Book of Mormon, Bro. Pack. I gave him my contact info so we could discuss ordering a print for me! :)

After lunch, when garbage cans filled up, people started stacking their trash neatly nearby. Isn’t that the most Mormon thing you’ve ever seen?