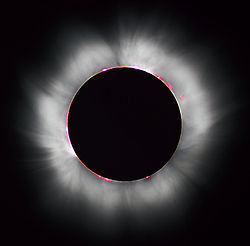 One of my favorite physical evidences for God comes from Hugh Nibley’s essay, “Before Adam:”

Here we get what is perhaps the most striking instance of “anthrocentric cosmology.” An astronomer (I think at Notre Dame) recently calculated the probability of a planet in the solar system having a moon (just one moon, at that) that subtended exactly the same arc in the sky as does the sun from the surface of the same planet. The chances are astronomically remote, so remote, indeed, that there seems to be something deliberate about what is otherwise a stunning coincidence. From no other point of view in all the universe will the sun and the moon have exactly the same size.

I had never thought of that before.  The moon is a fraction of Earth’s size and a couple of hundred thousand miles away; the sun is thousands of times larger than Earth and millions of miles away.  Yet, from the perspective of a human on Earth, they appear to be about the same size.  The odds of the ratio between those sizes and distances being a coincidence seems extremely unlikely.  This perfectly balanced proportioning results in the awesome spectacle of total eclipses, where the moon exactly blocks out the sun.  It’s truly awe-inspiring.

“All things denote there is a God; yea, even the earth, and all things that are upon the face of it, yea, and its motion, yea, and also all the planets which move in their regular form do witness that there is a Supreme Creator.”  Alma 30:44