A little over four years ago, I posted this video about Book of Mormon evidence online. In the last year or so, it has really taken off, and now has over 77,000 views, with over 1300 comments. Many of those comments are from me–I read and respond to almost everything. Here are some things I’ve noticed from engaging those comments:

It’s actually the same guy from yesterday’s “conversation” post. In the middle of the night after that discussion, he sent me the random new message you see below. As with yesterday’s record, I reproduce this here for you because, of the many debates I’ve ever had with anti-Mormons, this is probably the very best. It’s certainly the most comprehensive.

For one thing, he really did look at my evidence and addressed it. That’s pretty rare.

But mostly, this just shows how shallow the thinking is from the anti camp. You see most of the usual games here–lots of random trivia used as a scare tactic, strong claims made and repeated without evidence, changing the subject, outright contradiction whenever it’s convenient, projection, etc.

Note that even after the dust settled, he had never even tried to substantiate his own claims about the Book of Mormon–I analyzed his own argument more seriously than he did. Also, not only did he never explain the evidence for the Book of Mormon, he literally admitted that doing so would be impossible.

Warning: this post is VERY long. But worth it. Enjoy. 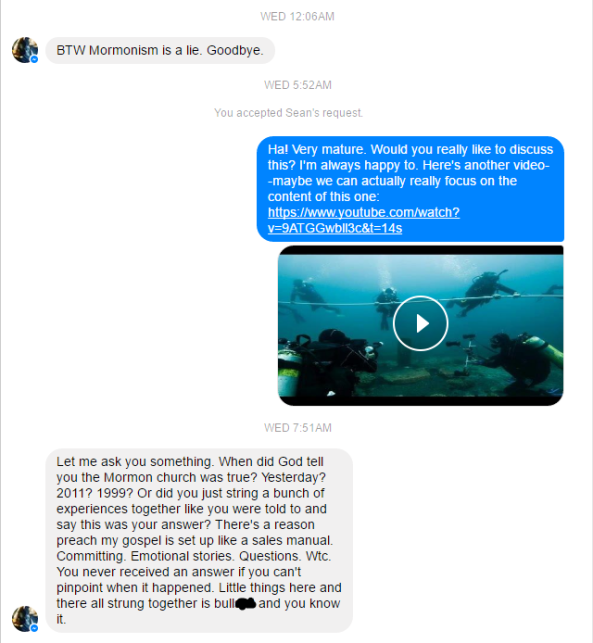 END_OF_DOCUMENT_TOKEN_TO_BE_REPLACED

Demeanor: Trump was dour and grouchy most of the time, while Clinton was smiling, calm, confident, and even friendly most of the time. She was never rattled; he frequently fell into traps that she baited.

Names: Clinton called Trump by his first name all night, and he never mentioned it, while he always deferred to her as “Secretary Clinton,” going so far as to make a point of pleasing her with the title. If he thought he was being subtly classy, it was so subtle that it got lost. She won that aspect by default.

Content: Trump actually had plenty of solid content, but his scattershot delivery and constant repetition undercut any power his points had. His content was consistently better than hers, but she also had an impressive roster of facts, and his points got lost in the noise of his painfully bad delivery.

Pivots and pandering: Both candidates pivoted unceasingly, but Clinton’s tended to be smooth and clean. Trump’s pivots were ghastly–bald, clumsy, and as obvious as the rookie he is. Clinton’s worst moment was her pathetic pandering to African Americans on the race relations issue, but Trump was bad there, too. He always sounded like he was regurgitating the talking points some intern made him memorize backstage. Of course, Clinton was doing the same, but she didn’t *sound* like she was.

Rhetoric: Trump actually did score a couple of solid one-liner shots at Clinton, but she had more, and her quotes will be more memorable. Where she always came back strong after he landed a good argument against her, he usually meekly acquiesced and then went off on another weird tangent.

Bottom line: Trump’s campaign has shown the far better fight for months, but tonight Clinton appeared completely presidential. It was a giant victory for her.

I’m getting a lot out of Mill’s autobiography. From the end of chapter 3, wise advice:

I learnt how to obtain the best I could, when I could not obtain everything; instead of being indignant or dispirited because I could not have entirely my own way, to be pleased and encouraged when I could have the smallest part of it; and when even that could not be, to bear with complete equanimity the being overruled altogether. I have found, through life, these acquisitions to be of the greatest possible importance for personal happiness, and they are also a very necessary condition for enabling any one, either as theorist or as practical man, to effect the greatest amount of good compatible with his opportunities.

And near the end of chapter 4 Mill details the casual self-improvement programs he and some friends conducted, mostly as a sort of intense book club. They studied languages, read and discussed serious works, and debated issues. Where are such groups today?

END_OF_DOCUMENT_TOKEN_TO_BE_REPLACED

Last weekend I judged a round of mock-congressional debate at a high school tournament.  Teens argued for and against various proposals they’d written, one being a bill to eliminate the debt ceiling.

One young man gave a speech for it.  Then a young woman asked him if this measure might not result in catastrophic debt accumulation.

“I don’t think our politicians would be that stupid,” he said.

A few minutes later she gave a speech, against the measure.  Directly referring to the boy who’d spoken before her, she said, “Our national debt is already 17 trillion dollars.  Don’t you think that’s stupid?”

My attempt at an objective analysis of some popular points:

This is a phrase that gets beaten to death in arguments, as in, “I don’t understand why you think…”  People use this phrase as if they’re introducing an accusation, when they’re only stating their ignorance!

Perhaps this is meant to be employed as a rhetorical device, trying to get someone else to draw out a defense of a position that you don’t think they really can defend, thus exposing their weakness.  (“I don’t understand why you believe that the moon is made of green cheese.”  “Well, it’s obvious, actually.  You see…”)

However, that’s not how it seems to be used most of the time.  Whenever I hear someone say this, it’s always delivered in a tone that suggests that the speaker’s confusion is inherent proof that there is no rational explanation behind whatever proposition they haven’t bought into.  But since when is a failure to comprehend on one person’s part somehow evidence against the claims made by someone else?

Such a reaction as “I don’t understand…,” intended to convey skepticism more than curiosity, strikes me as a singularly solipsistic excuse for an argument: “I have no real rebuttal to your proposition, but I just don’t like it, therefore it’s wrong.”

I’ve seen plenty of ecumenical books where people of different religions write explanations of their beliefs and then respond to each other with courtesy and respect, but never one for people with different political beliefs.  Both political extremes in America demonize and insult each other (and I’ve been guilty of that before, too, and need to change), but I’d love to be part of a series of essays where someone on the left and I explain where we’re coming from and discuss each other’s views.  Who thinks this is a good idea?  Who could work with me on this?

Would there be a market for such a work, though, in our poisonous political climate, where so much of the media on both sides are heavily invested in hateful hyperbole?

And is there a political synonym for ecumenical?