At the end of major reading units, I often have students do a series of small creative tasks to demonstrate understanding by extending or reinterpreting material in various ways. This pivotal scene from The Scarlet Letter has been combined with a classic TV reference. It’s one of the best I’ve seen in a while. Several months ago, the same student who did this drew the courthouse scene in The Crucible with Sesame Street‘s Big Bird sitting in the rafters. Very clever. 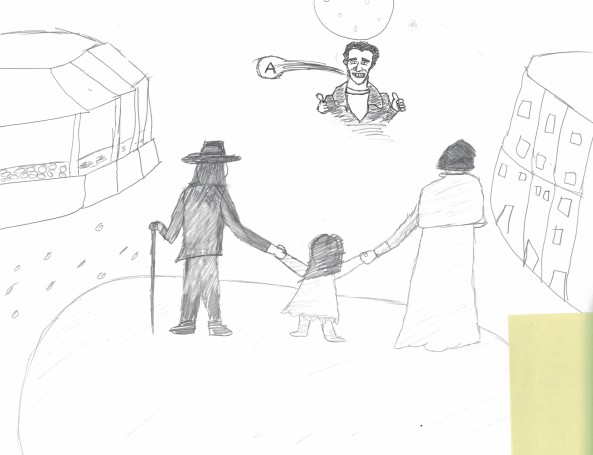 I’m currently teaching The Scarlet Letter, which uses the insult “naughty baggage” in chapter 2. I told the students that I’d never seen the term before, but that it clearly meant “bad woman” (as a weirdly high number of English words do).

But then I remembered–I own a copy of the Oxford English Dictionary! A nearby library was selling it used last September for $20. I talked them down to 15. A 99% savings on the cover price.

Anyway, here’s part of the relevant entry for “baggage.” Note the definitions: “a worthless good-for nothing woman; a woman of disreputable or immoral life,” “trashy, worthless, beggary, trumpery, despicable,” among others. Also note that all of them are marked “obsolete!”

All uses of the #naughtybaggage hashtag are clearly people also reading this book. I encouraged my students to get it trending, but alas, no dice so far. Maybe you could help? 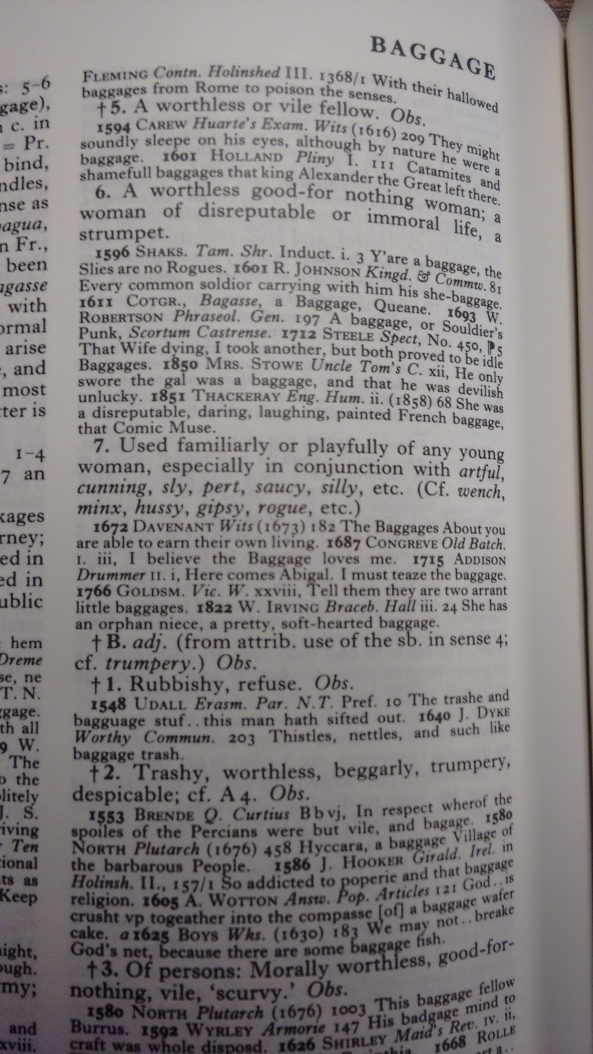 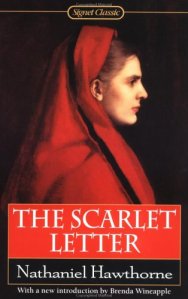 Today, as one class started their unit on The Scarlet Letter, I read the beginning with them and then summarized the flashback at the end of chapter 2:

“So this story is about a beautiful young woman who escaped poverty and married a deformed older man whose wealth gave her a life of travel and luxury.” I paused and they knew some punchline was coming.

“And then she became first lady of the United States.”

My juniors just started reading The Scarlet Letter, that tale of the poor Puritan Hester Prynne, who has an affair, gets pregnant, and is subsequently shamed by society ever after. In chapter 2, she must mount a scaffold and spend part of the day being stared at and scorned by the entire town, in an act of public shaming meant to punish her sin.

After reading that part with them, I asked my class, “Can you imagine what that must have felt like for Hester? To be forced to stand on a stage while a thousand people stare and judge you for your human mistakes?”

They all looked a bit amused as the answer to my clumsy rhetorical question finally became clear to me.

You see, I teach at a school for the performing arts. 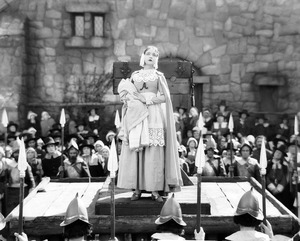 I like to show how the books we study in school have left a lasting legacy to contemporary society.  If nothing else, when students complain how boring and outdated the books are, I can either try to elicit some open mindedness by showing them that P. Diddy consciously imitates The Great Gatsby, or I can at least argue that their recalcitrance is in opposition to the popular culture with which they’re enthralled.

This year has been an especially good one for that.  I started the year off with The Scarlet Letter, just as a teen comedy loosely based on it, Easy A, hit theaters.  When we read Moby Dick, I was able to show them the recent Blackberry ad about the novel (many students told me that the ad made much more sense afterwards!).  We finished Huckleberry Finn last month and now, as we review the semester, there’s a national controversy brewing about a new, censored version of the text.

Near the end of this year, when I try to wrestle some Faulkner into my students, I’ll be able to tell them that Hollywood hunk James Franco is directing a new film of Faulkner’s novel, As I Lay Dying.

The first four weeks of school are over.  Some thoughts:

Last night before an English 101 class, I grabbed a complimentary copy of USA Today off of a newsstand.  I thought I’d have a few minutes to kill near the end of class while the students did some peer editing, and I wanted to do a crossword puzzle.  The newsstand was out of the New York Times.

But when the time came and I was looking for the puzzle, I never got to it.  I found an article instead about a new Web site that had just launched.  I went to check it out and was both amused and impressed.

Our hostess is a quirky, perky, goofy, nerdy young lit major named Jenny, who takes viewers on a whirlwind tour of classic literature in a series of bite-sized videos.  The site, 60secondrecap.com, is a Cliff’s Notes for the text messaging generation.  They just got up and running, so their library will start building over time.  I looked at two of The Great Gatsby videos last night, and liked them enough to plan to use them in my high school classes for a fun review (if the overzealous school district server doesn’t block it first).  Hopefully she’ll get The Scarlet Letter and Lord of the Flies up by the time I’ll need them in a few weeks.

And Jenny, since your site says you take requests, any chance you’d consider doing something by Cormac McCarthy?