If you’ve never read the book of Judges in the Bible, you’ve missed this little gem in chapter 3:

17 And he brought the present unto Eglon king of Moab: and Eglon was a very fat man.

21 And Ehud put forth his left hand, and took the dagger from his right thigh, and thrust it into his belly:

22 And the haft also went in after the blade; and the fat closed upon the blade, so that he could not draw the dagger out of his belly; and the dirt came out.

So, not only is this king assassinated, but the text makes it as pathetically undignified as possible. We have to be told of the king’s obesity, with the lovely detail that the sword sank into his guts up to the hilt, so that Ehud couldn’t even pull it out again.

And then that bit about “dirt,” a delightful euphemism telling us that when he had been impaled through the intestines, this king’s last act on earth was to soil himself as his bowels released.

These details are here, and they’re here for a reason. The only thing I can think of is that the author really wanted to humiliate the memory of this king who’d held Israel captive for 18 years (Judges 3:14), perhaps as an illustration of God’s power to deliver his people and punish those who oppose him. Can there be any other reason for including these unsavory details? 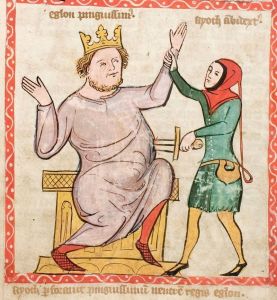