I haven’t posted anything in nearly a week largely because I’ve spent most of my spare moments engrossed in James Clavell’s epic Shogun. 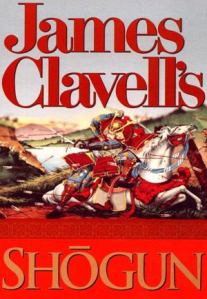 I don’t remember the groundbreaking 12-hour 1980 TV miniseries based on Shogun, but I clearly remember seeing Pierce Brosnan in the miniseries version of Noble House later in the 80’s.  When that came out, I was visiting my grandparents’ house, and lo and behold, Grandpa had a copy of Clavell’s massive novel on his shelf.  In all of my elementary school earnestness, I picked it up and opened to page one.  Bored and confused, I never made it to page two.

I recently rekindled an interest in reading Clavell’s Asian Saga, or at least Noble House.  I figured I should start at the beginning, so I picked up a copy of Shogun.  I began reading during a Spring Break trip with the family to Disneyland.  At first, I picked away at it while enduring endless lines, but soon my nose was buried in between the pages as I tried to navigate crowds and follow my wife as we walked around the park from ride to ride.

Near the end of that trip, I had come across the relatively early scene where one samurai suddenly flings himself off a cliff just to get the attention of a more important samurai stranded on the beach below.  I stopped in the middle of a walkway, backing up lots of foot traffic around me, but was totally oblivious as people started to go around me because I was still in shock from what I’d read.  That’s when I realized that Shogun was something special.

I’ve read my share of military thrillers–the Tom Clancy type–but Shogun is easily the most macho story I’ve ever read.  The constant dwelling on honor, strategy, and a nonchalant attitude towards death and violence make this one seriously masculine novel.  Over the course of eleven hundred pages, Clavell demonstrates that he is a master of narrative.  In fact, the only thing I’d ding about Shogun is that sometimes the spying, reversals, scheming, and plotting–in both senses of the word–get to be too dense.

But it’s worth it.  Read it if only for the wealth of detail about medieval Japan and the stark beauty of Clavell’s prose–he deftly combines the testosterone of the main narrative with occasional moments of crystal clear poetry (literally, a few times, by including a handful of haiku).  That aside, it’s still a juggernaut of action.  One scene that forms a crucial part of the climax has an attack by ninja on a castle just before dawn, including a protracted battle with hordes of samurai.  I couldn’t take my eyes off the pages until the battle was over, thirty pages later.  Such addictive storytelling is rare, and valuable…and fun.

I just put the DVD of the Shogun miniseries on hold at the library.  After that, on to Noble House!